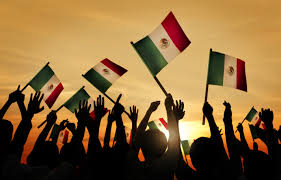 I’m writing this post between Labor Day and Mexican Independence Day , two holidays that oddly converged in my life in 1988.

Labor Day makes sense to me.  I’ve always worked.  I got my first job delivering papers a few years after my parents’ divorce, sometime around 12 years old.  It was clear to me then, as it is now, that if I wanted money, which was in short supply in my house, I’d have to get a job.  After that, I worked as a waitress at the Purple Pickle, behind the counter at Dunkin Doughnuts, giving out free samples at Yogurt Delight, as a hostess at Villa Roma Pizzeria, selling men’s French and Italian clothing at Papillion, as a camp counselor for developmentally disabled adolescents, selling women’s high-end lingerie at Le Printemps, and a cocktail waitress at Kutchers in the Borscht Belt.  That was all before college.  I then worked every semester and summer during undergrad and two out of my three years at law school. Given all this, it was odd for me to move to Mill Valley later in life and have moms ask, “Do you work?”  I sincerely had no idea what the alternative was.

Despite having had many jobs, leaving each job was unremarkable, with one exception.

It was my first job after graduating law school, $60K in debt from the loans I’d taken out to pay tuition.  I figured I could work making the big bucks for two years and then find my dream job in the social justice world.  I remember sharing my deep reservations about working at a corporate law firm with a college friend.

“What are you scared of?” he asked.

“That I’ll lose myself.”

“Don’t worry about that.  If you lose yourself, you’re not who you think you are, so it won’t matter.”

I accepted an Associate position at a corporate law firm located on San Francisco’s Embarcadero.

The experience was mind-numbing.  My daily bookends became a morning Cinnabon and an evening vodka grapefruit. Nestled in between were cookies and sandwiches from Specialty bought to feed the new Associates at our weekly gatherings.  I worked on construction defense, tobacco litigation, and failed Savings and Loan cases.  My output was unimpressive, I was uninspired.  After a mere forty-five weeks there, my spirit dulled, I knew I could not last a full year.

I gave a month’s notice mid-August. My last day would be Friday, September 16, 1988.  I had no idea where I’d go or how I’d make a living.  People began to ask about my plans.  When I shared I had none, they balked.

Clarity is a beautiful thing when you have it.  I was steadfast in my vision that my only goal in life was to extricate myself from the hell of representing tobacco companies in wrongful death litigation while sitting at a long table with colleagues chain-smoking cigarettes.  (Yes, in 1987 and 1988, that was legal).  Beyond exiting, nothing mattered.

On my last day, as I walked the halls at 5 pm to say meager goodbyes, I passed an office where several men were sitting around in a somewhat festive spirit.  I poked my head in to bid adieu and they waved me in.

“Come have a shot of tequila. It’s Mexican Independence Day!”

Had I any fears about my future, that moment erased them all.  Even though I sadly did not know much about the history of Mexican Independence, I was sure that the Mexican people who fought and died in battle weren’t imagining a group of white corporate lawyers sitting around doing shots of tequila to commemorate the blood and sacrifice of their struggle.

I declined the offer.  They insisted.  I insisted they not insist.  I hadn’t lost the me I thought I would:  she was here taking me by the hand to the elevator to descend to the ground floor.

Ciao, Adios, See Ya! I left.  To this day, that is one of the best decisions I’ve ever made.

Here’s one site to learn more about Mexican Independence Day.  The fact that their struggle parallels with today’s battles for equity won’t be lost on you, and may you never be lost on you either.

A graduate of UC Berkeley and the University of Pennsylvania School of Law, Maria was a fellow with the National Hispana Leadership Institute, where she attended the Center for Creative Leadership and Harvard School of Public Policy. She received her mediation training from the Center for … END_OF_DOCUMENT_TOKEN_TO_BE_REPLACED