You are here: Home / Archives for #whitesupremacyandme 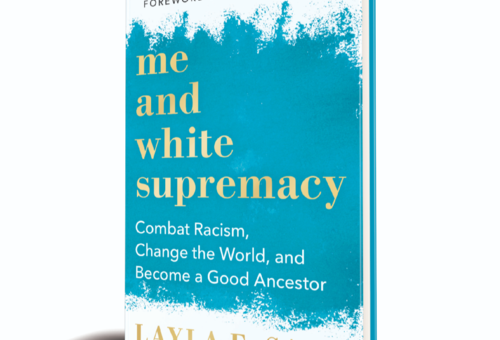 I was talking to a colleague several months ago about her frustration with her organization’s lack of meaningful engagement on racial equity. The nonprofit she works for is talking about racial equity but not walking the talk. They have created the requisite Diversity, Equity, and Inclusion (DEI) committee. The Executive Director has sanctioned the Committee’s meetings but has given it no real power. The group wants to do something meaningful, but the organization is moving slowly, or not moving at all.  Sound familiar? I feel like I’ve had variations of that same conversation every week for the past year.

At the end of our chat, I suggested that she encourage her entire organization to read and discuss the book me and white supremacy (2020) by Layla F. Saad. The interesting thing is that when I made that recommendation, I had not read the book.  A few days later, feeling the hypocrisy, I pulled it off my bookshelf and began to read.

Regardless, I read me and white supremacy in order to lend credibility to my recommendation.

A mere fifteen pages in, the author writes:

“This work is for any person who holds white privilege…this includes persons who are biracial, multiracial, or white-passing People of Color who benefit under systems of white supremacy from having lighter skin color than visibly Brown, Black, or Indigenous people.”

My mother is a white Jewish woman, and my father is an immigrant from Cuba. My skin is several shades lighter than my brown-skinned father’s. I have certainly benefitted from white skin privilege. This book is for me, I realized.  And so, the twenty-eight-day challenge took root.

I journaled each night and confronted myself in ways I had not previously done. One of the most moving chapters for me was on white exceptionalism. As the author explains:

“[w]hite exceptionalism is the idea that you are somehow special, exempt, above this, beyond this thing called white supremacy.  That white supremacy is what those other white people do, but not you.  It goes hand in hand with white superiority and the belief that you have already done some antiracism work, you have already shown you’re an ally, so you do not need to keep showing up and doing the work.”

Yes, that is how I felt.

Reading it has been a deep and meaningful journey, one which does not have an end point.  The daily inquiries offered important opportunities for reflection where I could no longer hide behind my person of color status to avoid looking at the ways white supremacy has impacted my mind, my identity, and my heart.

The book is a gift that keeps on giving:  A few weeks ago, I referred a client to me and white supremacy (Day 3) on tone policing when she discussed her frustration when management responded, “we want a positive culture within the organization” in response to a black woman voicing a concern. It came up again days later when another client (this time a white woman) shared that she was told she’s “too emotional” about racial equity.

My colleague never did ask her organization to read the book and my two clients are still frustrated with their organizations’ tone policing. But organizations are made up of individuals and as Adrienne Maree Brown says, “The small is all,” which I understand to mean that our individual lives and actions are microcosms that make up the larger landscape, so taking a meaningful step to read and learn is bound to have ripples on those you touch, including your co-workers.

If you haven’t yet read the book, now’s the time.  Read it alone, read it with friends, read it with family, but please do read it and recommend it to others (and my final request:  buy it from your local independent bookstore).

A graduate of UC Berkeley and the University of Pennsylvania School of Law, Maria was a fellow with the National Hispana Leadership Institute, where she attended the Center for Creative Leadership and Harvard School of Public Policy. She received her mediation training from the Center for … END_OF_DOCUMENT_TOKEN_TO_BE_REPLACED